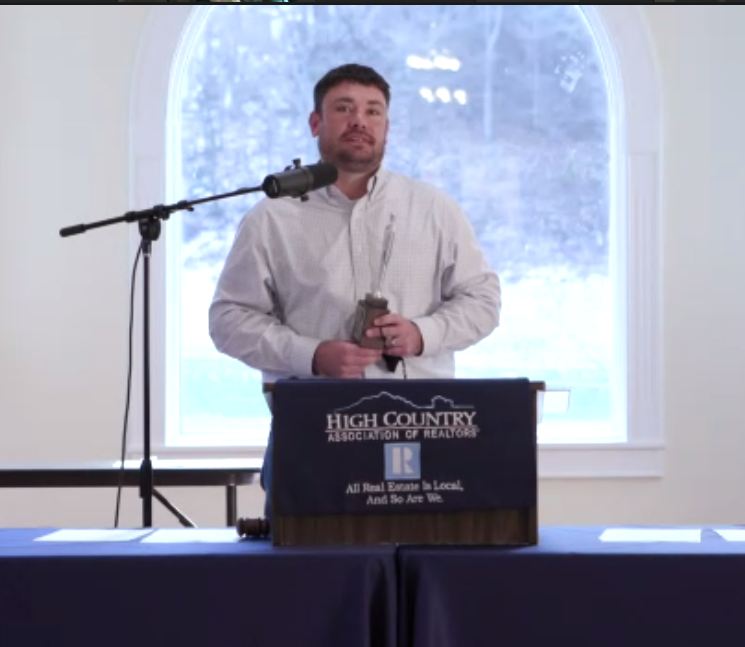 It is with great pride that Blue Ridge Realty & Investments announces one of its co-owners and managing partners,  Bill Aceto, has received the honor of being named the High Country Association of REALTORS® 2020 REALTOR® of the Year.

This prestigious award is given each year to a member of HCAR® who has provided outstanding service to the real estate profession and the community during the year. Some of the criteria for this award include faithfulness to principles of organized real estate, laws and regulations of HCAR®, and the Code of Ethics of the National Association of REALTORS®. Additionally,  the selection committee chooses a candidate based on their commitment to civic, service, and charitable activities, along with political action, fraternal, and religious groups.

A licensed REALTOR® for over 13 years, Bill and his business partner, Todd Rice, have owned Blue Ridge Realty & Investments for over 6 years, along with the property management divisions under Boone High Country Rentals and Blue Ridge Professional Property Services (owned and operated for over 12 years), and Ashe Rental Agency (owned and operated for over 2 years) . The partners have grown the company from 7 agents to approximately 50 REALTORS®, with 7 office locations and 33 employees. Blue Ridge Realty & Investments will mark 40 years in business in 2021; they are among the top 3 companies in overall sales, and the number 1 independently owned company for sales in the High Country Association of REALTORS®.

It would be difficult to fathom Appalachian State University having a more devoted son than Bill Aceto; he is an active member of the ASU Alumni Association, the Yosef Club and was elected to the prestigious position as a member of ASU's Board of Visitors. In addition to his work with ASU, Bill is energetically involved with the Young Professionals Network of Boone, and is also an active member of the Boone Area Chamber of Commerce in addition to being a former member of the Town of Boone Board of Adjustment (ETJ Alternate). He is also a past Chairman of Watauga County Board of Elections.

A native North Carolinian, Bill grew up in Montreat, where his parents, Steve and Fran, still reside. He is a proud Eagle Scout, as well as an avid outdoorsman. But his proudest achievement is his wonderful family; Bill is a devoted husband to his wife, Sallie, and an incredible father to his children, Liam (3) and Maggie (1).

It is difficult to explain in mere words what an amazing asset Bill is to the Boone, Blowing Rock, Banner Elk, and surrounding areas. His work, both as a REALTOR® and an employer, helps strengthen and stabilize the community. He is a conscientious and involved citizen, demonstrating in myriad ways his commitment to the health and well-being of his community.